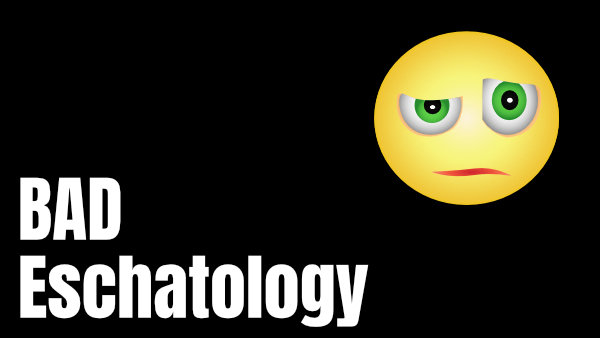 After getting both books out a month ago, I went looking for what other people believe about Last Days. It has been a fascinating journey through some really bad eschatology. Worse, very few seem to understand why they believe what they believe, and even fewer seem able to understand why people would disagree with their position. That’s bad.

Our pastors have not been giving us the tools to help us understand the Bible, to rightly divide the word of Truth (2 Tim 2:15). And, because we are unable to do so, Christianity has devolved into a team sport, where ours is always right and yours is heresy.

Bad Eschatology And An Announcement

Before I go one, here’s that announcement:

I will be closing the server for the Shock Letter at the end of November. Substack is far more efficient at content delivery, and the server that I have been paying for is a bit expensive. All subscribers will be transferred to Substack. If you don’t want that, now is the time to unsubscribe.

Also I’m pleased see that the physical copies of When Gog Comes and Ezekiel’s Fire have been getting into your hands. I was a bit worried about how they would turn out, but it looks like Amazon did a good job printing them.

A kind reader sent me these two pictures: 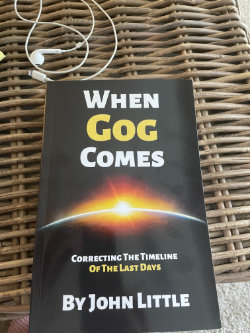 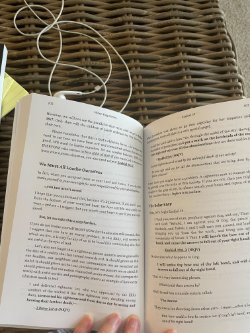 So, they’re real, and look good. That is a huge relief.

Thank you so much for that Cindy!

Now, where were we?

To be clear, we all – all of us – get things wrong. There is not a single person on this planet without error in what he or she believes to be true. You, me, everyone – we all get something wrong. There have been several times in my own life, in which I had to unlearn what I thought to be true. And yes, that’s hard to do.

So, is it possible to give brothers and sisters in Christ the permission to make mistakes since we make them too?

Unfortunately, the answer to that question seems to be “NO!”, since I’ve been thrown out of three Eschatology forums already. Asking questions that the people can’t answer, is a quick way to get you thrown out.

What got me banned?

It is amazing to see the howls of outrage if you dare to claim that there is no gap between Week 69 and Week 70 in Daniel’s prophecy about the coming of Messiah. And, when you point out that Jesus confirmed the New Covenant with many, after He died and rose again and ended the need for animal sacrifices, they’ll take you out and give you a good stoning.

I find it ironic that my position was actually quite common among Christians up until John Nelson Darby arrived on the scene in the 1830s. Yet, according to some, I’m bringing in some alien ideology to corrupt the church. But, when I mention that Spurgeon held the same view, they get really quiet and change the subject.

By the way, whenever someone says that the Great Tribulation is seven years long, it means that they believe in the gap theory about Daniel’s 70 Weeks. They think that the final Week will be fulfilled in the future.

Yet, there is no place in scripture that records the Great Tribulation as being seven years long.

Think that through for a moment. Nowhere is the Great Tribulation described as seven years long. Not one verse in any book of the Bible makes any mention of it. Not. One.

So, why do they do this?

The Only Way To Make Dispensationalism Work

Well, John Nelson Darby taught that there was a centuries-long gap between Week 69 and Week 70 because that was the only way to make Dispensationalism work. That’s right…

…Dispensationalism falls apart if there is no gap in Daniel’s 70 Weeks.

Over the years, several friends of mine acknowledged this to me by saying:

“We put a gap there, because we have to.”

And, the reason for this, is because their theory requires the return of Temple Sacrifices, if they are going to escape the Great Tribulation.

And yes, this is all about trying hard to not believe in something unpleasant.

The amount of vitriol that I receive from Dispensationalists is complete proof of this. Tell them that you believe that we will experience the Great Tribulation, and you will be met with pure hysteria. I have friends who have been thrown out of pulpits. One pastor friend confided in me that he dare not admit to believing such a thing, because he’d lose more than half his congregation. And that, my friends is a great example of cognitive dissonance. Here’s a definition from Psychology Today:

Cognitive dissonance is a term for the state of discomfort felt when two or more modes of thought contradict each other. The clashing cognitions may include ideas, beliefs, or the knowledge that one has behaved in a certain way.

And yes, I understand that psychology is flawed and cannot be trusted. I get that. And, I don’t trust it any more than you do. But, the above definition is still accurate. And, it perfectly describes what I’m seeing every day on the eschatology forums. I always know when I’ve run into someone suffering cognitive dissonance, when they start calling me awful names and throw me out of their forum. But, I’m being a little unfair to Dispensationalists.

Because non-Dispensationalists are almost always worse.

The three Facebook forums that banned me, were all Post-trib Rapture forums. They literally could not handle any questions about what the prophets said in the Old Testament. Deep down, they knew that there were many prophecies that had not been fulfilled yet, but their theories about the Last Days kept them from admitting any of that. So, the only way to resolve their discomfort, was to get rid of the person asking impertinent questions. So yes…

…post-tribbers will suffer cognitive dissonance and cast you out when you offer proof that their position is not Biblical.

For 99% of those who believe that we are going through the Great Tribulation, admitting that the Salvation of Israel is in the future is just too much for them to handle. And, this is the group that has given us so much antisemitism among Christians. I am shocked at how many christian antisemites there are, and it makes me wonder about their salvation.

How can you hate the Jews and be Christian?

How can you despise ANYONE and be Christian?

As bad as the Dispensationalists are, the non-Dispensationalists are worse. I understand why they want to push back against John Nelson Darby. I too am aghast at many of the distortions introduced by pretribbers. I am upset that many Christians have been lulled into complacency by a prosperity doctrine that teaches smooth sailing for every follower of Christ. The idea that God would never allow us to suffer persecution is a total – even satanic – lie. But, that doesn’t excuse the terrible corruption introduced by the Preterists, Amillennialists, and Post-millennialists.

Who did I leave out?

Unfortunately, I haven’t found very many Historic Premillennialists, and those that I’ve run into, have their own problems.  Most seem willing to throw out the Old Testament altogether. Very few seem able to accept the prophesied return of the Children of Jacob, while also believing that we will go through the tribulation of the Antichrist. And, I think that I might know why.

Here’s the passage that everyone stumbles over:

12 And I beheld when he had opened the sixth seal, and, lo, there was a great earthquake; and the sun became black as sackcloth of hair, and the moon became as blood;

13 And the stars of heaven fell unto the earth, even as a fig tree casteth her untimely figs, when she is shaken of a mighty wind.

14 And the heaven departed as a scroll when it is rolled together; and every mountain and island were moved out of their places.

16 And said to the mountains and rocks, Fall on us, and hide us from the face of him that sitteth on the throne, and from the wrath of the Lamb:

17 For the great day of his wrath is come; and who shall be able to stand?

I can tell you that I spent most of my life, stumbling over that passage. And, it was only a couple years ago, as I was writing When Gog Comes, that I realized what that passage was talking about. So, I completely understand why it has been so hard for people to place Seal Six in its proper context.

For those of you who haven’t had a chance to read my book, Ezekiel’s Fire, what verses 12 through 14 are describing is the aftermath of a small nova event. For those who have not been keeping up with what astronomers have been discovering, there is a new word out there that describes all this:

That word is starting to show up in scientific papers, as we see star after star in our galaxy are blow off the outer layer of its surface, in a flash of light – before dimming as the clouds of dust that follow spread outwards. When this happens on our own sun, those clouds will turn the color of the moon to blood, make the sun look black like sackcloth of hair and the stars become obscured as these clouds race past Earth. But, the worst thing of all will be the global earthquake that will destroy every city around the world and kill billions.

Unfortunately, all of that can be scientifically explained, and I wish that I didn’t understand it. This explanation makes too much sense to be ignored, but it’s so horrifying that you hope that it isn’t true. This is why I sympathize with those who reject any and all notions that this is a micronova.

I don’t want to believe it, so I understand if you won’t.

But, ignoring the future does not keep us from experiencing it. And, I am determined to make what’s coming easier to understand for as many people as possible.

This is why I created a new website called Revelation Six, because the ride of the Four Horsemen of the Apocalypse will be truly terrible, and it will all get so much worse when Ezekiel’s Fire comes.

11 thoughts on “Bad Eschatology And An Announcement”