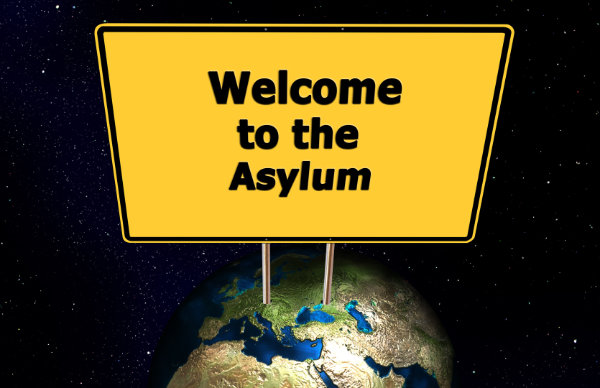 History pivots. Pressures build, pulling civilization in one direction until someone makes a decision that forces us onto a different path. Our path to where we are now, is made up of these pivot points. And, we are going through one right now.

We knew that a pivot was coming. Something was bound to happen that would change our path into the future, and we knew that it was going to be bad. We just didn’t know that it would be this.

This is all a part of our rendezvous with prophecy. God said that it would happen. And, it will. But, there’s madness involved.

The Madness Pivot of History

On June 28, 1914, Serbian madness murdered Franz Ferdinand, heir to the Austrian Empire. Austrian madness, followed by German madness launched World War I. Millions died, and madness was ultimately the cause.

German and Japanese madness launched World War II. The madness of Russia and China launched the Cold War. American madness killed millions in the (un)Civil War, Asia, South America, and the Middle East. And yes, those regions had their own share of madness that killed millions.

I illustrated some of that madness here:

I would love to stop the madness. In one sense, that’s why I write these articles. But, I’m afraid that our insanity will not be cured until there’s a new heaven and a new earth. So, I hope that you are ready for even more madness.

Can there be anything more insane that rebellion against our Creator?

In a very real sense, our madness is how prophecy will be fulfilled. The madness of Muhammad kept the rest of Europe and Asia out of the Land of Israel. And, when the madness of World War I destroyed the Ottoman Empire, the stage was set for the Children of Jacob to return to their land. European and Arab madness demonstrated the need for a Jewish State, and here we are.

Each turning point in our history seems to be governed by these fits of madness. Of course, our insanity would have little effect, without resources, wealth and technology. As our ability to kill each other grows, so does the cost of madness.

This brings us to Putin’s War in Ukraine. Russians and Ukrainians normally don’t want to kill each other, and it took someone named Vladimir Vladimirovich Putin to make it happen. Yes, I’m sure that there were others who convinced him that it was a good idea. At least, I hope so.

The idea that someone could start a war all by himself is worse than if it was a group decision. We often tell stories about ‘that one guy’ who caused it all, but usually it ‘takes a village’ to make it happen. This time it was that mad little ‘village’ inside the Kremlin that started this war.

Oh, I’m sure that there was some pragmatism and maybe even a little of those ‘good intentions’ that everyone talks about. But, it was still an insane thing to do. And, it was just as insane for the United States to lure him into doing it. There’s a lot of blame for everyone.

It’s even a little insane for the Ukrainians to resist so strongly against this Russian invasion. I identify better with that kind of madness, so you won’t hear me complain about it very much. I have a soft spot for self-defense, and I admit to not being very rational about it.

So, here’s the question:

Where is this pivot in history taking us?

And, there’s another question that weighs heavily on my heart:

How many will suffer and die because of this?

Even if this war ended right now, and even if the world was immediately able to resume ‘normal’ life, the suffering will be immense. The rise in food cost will condemn many to famine and starvation in the most vulnerable countries. And, we have yet to understand the cost that we will all pay in terms of lost jobs, inflation and misery.

Of course, the war won’t end today. Putin cannot back down. He and his Kremlin are stuck in a situation of winning, or death. Every time Russia lost a war, there was a bloody revolution.

So, what happens if Ukraine loses?

What happens if Russia fails to win?

Well, if Russia loses this war, it will ultimately be Sergei Shoigu‘s fault. He’s a corrupt politician without any military experience, and it looks like he bungled the whole operation:

The Failed Logistics of Russia’s Invasion of Ukraine

Russia made a serious mistake in how they started this war. In fact, if they understood what they were facing, they would not have launched it in the first place. Either they really thought that Ukraine would welcome them with open arms, or they thought that the Ukrainian military was weak and unprepared. Or, both.

To bring it back to the terms of this article:

It was madness to launch this war in the way that they did.

Here’s another look at the mistakes that they’ve made:

Russia’s war in Ukraine is not going to plan

However, that doesn’t tell us Putin’s motivation for this invasion. For that, we need to look at Aleksandr Dugin, who has often been referred to as Putin’s Brain.

Investigating Aleksandr Dugin and the “soul of Russia”

Dugin’s ideology is sick, twisted and violent. It’s also pretty much the ideology of everyone in the 19th century. Britain, Germany, France, Belgium, Spain, America… again, everyone …believed in their own version of ‘manifest destiny’ and were willing to kill people to make it happen. And, if you think that I’m unfair to include the US in this, you need to read what Major General Smedley Butler had to say about his time serving in the US Marine Corps.

Smedley’s book, War Is A Racket is required reading for anyone who thinks that American foreign policy is anything but vile. And, as an American, I share in some of the blame for letting Washington and Big Business lead us into one obscene war after another. I wasn’t thinking and let the masters of propaganda fill me full of their talking points.

When Paul said that the love of money was the root of all evil, he wasn’t kidding.

However, there is something distinctly Russian about the evil that we’re talking about here. Just as a point of reference, in 2014, Russians bought 500,000 baseball bats, and only one baseball. You get them at auto parts stores to help solve traffic conflicts. That ‘Russian Spirit’ is reflected in this article that popped up recently:

What the West gets wrong about Putin – When we first met, he already knew the power of terrifying adversaries
https://unherd.com/2022/01/what-the-west-gets-wrong-about-putin/

That article by Harald Malmgren reflects the two decades of rumors that I’ve heard about politics in Russia. In fact, the investment company that I worked for back in the ’90s was approached by Russian ‘businessmen’ about investments. When one of the partners in the company asked them about what happens if their portfolio loses money, they responded:

“We break your legs.”

And, if they lost too much money, it would escalate from there.

Here’s another view of Russia’s invasion of Ukraine:

This is a brief guide for selected threads. It will include materials on the current war and briefs useful for prognosing the future of the region once the war is over 🧵 pic.twitter.com/d7YThU32MB

There’s another problem with our view of Russia and the Russians. Many think that the Russians could not possibly support Putin in this war, but they’re wrong:

They have it backwards: His power inside Russia is surging.

A thread on what analysts are getting so wrong. 🧵

The Russians think that this war is America’s fault, and that ANY suffering they undergo will be our fault as well. I hope that you let that sink in, ‘cuz it’s madness.

The Four Horsemen And Gog

So, you understand that all of this is madness. You get it. You probably ‘got it’ three articles ago. But, there are more serious questions behind all of this:

Which of the Four Horsemen of the Apocalypse is riding?

What does this say about who Gog is?

I can hear the hoof beats of the Black Horse already, even though his ‘ride’ won’t be visible for a little while longer. Hopefully much longer. But, that begs the question about whether it is the White Horse riding, or if this kicks off the ride of the Red Horse. For more on what I mean, read Revelation 6.

I dread the ride of those horses because I understand how many must die before Revelation Six is finished. We’re talking about the suffering and death of billions of people. And, I was hoping that it wouldn’t start so soon. But, the unrest from high food prices has already started. And, it will only get worse from here. And then there’s the question about Gog.

If Russia captures Ukraine and emerges from this conflict unscathed…

…does this point to Russia as the Land of Magog?

Will some other country take this opportunity to mount their own plans for conquest?

Two articles popped up this week that point either way:

Those ‘Middle East volunteer fighters’ would come from Syria and Iran and could offer us a picture of something that could grow much larger.

Oh, and here’s one more thing. And while I don’t believe this to be truly significant, I still can’t stop thinking about it:

Look at the guy on the white horse. He has a spear instead of a bow, so that might disqualify Russia from being the ‘White Horseman of the Apocalypse’. And, it’s also true that a white horse has always been a symbol of conquest. So, I don’t know if the imagery on the Russian Coat of Arms is relevant.

Here’s the Wikipedia list of “Coats of arms with horses”:

I’m sure that there are more, but it’s a start for those interested in digging into this. Just don’t take this too far.

Again, I think that we should be considering which horse of the Apocalypse is about to ride, and then… how this points to the coming of Gog and Magog. I have proven that they will happen long before the Antichrist rises, and you can see that proof, here:

31 thoughts on “The Madness Pivot of History”