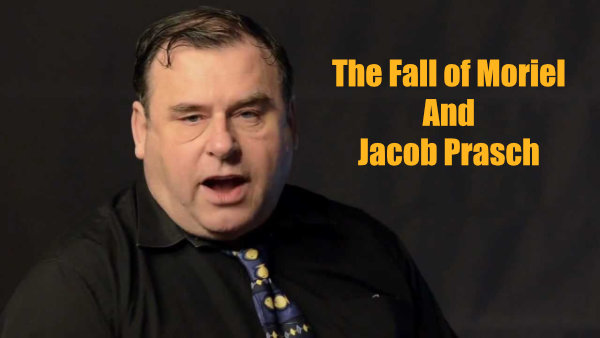 Joshua Chavez has released yet another video alleging fraud and blatant dishonesty on the part of Jacob Prasch. A lot of his evidence appears legitimate and even criminal, and if proven true… some Moriel members may spend time in jail. Charity fraud is usually a criminal offense, unless your name is Hillary.

However, there’s a cloud hanging over Joshua, regarding his wife, Joelle. So, I reached out to him, attempting to get his side of the story about what happened. I’m afraid that his response was extremely unpleasant and completely lacking in relevant information.

Jacob Prasch (aka James Aloysius Prasch) has serious problems on so many levels that it’s hard to know where to begin. He’s clearly a malignant narcissist. He’s clearly dishonest. And, his teaching on the Metatron is straight up demonic. But, it appears that he may have also been engaged in charity fraud.

That allegation was raised here:

Unfortunately, a lot of that four hour and eleven minute video offers up a mix of evidence that is sometimes weak. I’d have to go through it again to try and weigh which part of what Joshua says is firm and which isn’t. But, when you scrape away the innuendo and ‘guilt by association’, what’s left is pretty damning.

Based on his public pronouncements, Jacob is either lying outright or has engaged in charity fraud.

My first website went up about 25 years ago, and I’ve created and maintained lots of sites since then. I can tell you with absolute certainty that it is impossible for Jacob to make a massive amount of money on three web domains, supporting himself and putting his kids through college and law school. It’s just not possible. So, either he’s lying, or he’s been using those websites as a way to keep his salary off the books of Moriel – by having Moriel Ministries lease those domain names for $100k a year. Depending on how that was done, that’s a pretty clear case of charity fraud.

The Dishonesty Of Jacob Prasch

Of course, we as Christians are more interested in the moral dimensions of Jacob Prasch, and it’s clear that he’s been horribly dishonest. He created Moriel Ministries with one half-truth after another and has now turned to telling straight up lies. And yes, claiming that he lied in his videos would be a valid defense in criminal court. But, lying to the Body of Christ is far, far more serious. Eternally serious.

I have related most of my concerns about Jacob Prasch, here:

The Fall of Moriel and Jacob Prasch – A Special Report
https://omegashock.com/2021/10/16/the-fall-of-moriel-and-jacob-prasch-a-special-report/

I hate doing those reports. The thought that such evil would be tolerated by Christians is horrifying. Yet, Paul warned us that people like Jacob would rise in our churches:

28 Therefore take heed to yourselves and to all the flock, among which the Holy Spirit has made you overseers, to shepherd the church of God which He purchased with His own blood. 29 For I know this, that after my departure savage wolves will come in among you, not sparing the flock. 30 Also from among yourselves men will rise up, speaking perverse things, to draw away the disciples after themselves.

In his last letters, Paul spoke about these wolves to Timothy, and it’s astounding that the early church would allow then into the Body of Christ. So, if the early church was easy prey to wolves, it should not surprise us that Prasch would gain such a big following among our own brothers and sisters. But, I’m afraid that I need to talk about more than just Jacob.

For the past five years, Joshua has sought to be a judge of what is corrupt in the Body of Christ. And, while he comes across as bitter, angry and vengeful, I have found his material to be useful at times. Some of his analysis and evidence can be sketchy, but some good bits of information do come through.

Unfortunately, instead of mourning and grieving over the terrible plight of the church, Joshua seems to take delight in dancing on her grave. I’ve left several comments over the years mentioning my concerns. But, in my own mind, I attributed them to the passions of someone young in Christ. But, there comes a moment in time, when you can’t do that anymore.

I don’t remember when the rumors started to circulate about a woman that Joshua married and then cast off. I wasn’t sure what to make of this until people started coming forward asking Joshua to fix his relationship with Joelle.

According to all the evidence that I’ve been able to compile, Joshua had a long distance correspondence with a young South African woman named Joelle. This communication turned towards courtship, and Joshua invited Joelle to New Mexico. Apparently, Joshua was so taken with her that he quickly proposed marriage, and she accepted. Joshua and Joelle wrote out their wedding vows to each other and Joshua’s step-father performed a private wedding ceremony. However, Joshua did not even try to obtain a marriage certificate, and three months later, Joelle was forced to return to South Africa in devastation. And yes, they could have driven up to Las Vegas to get such a certificate, if New Mexico wouldn’t give them one. So, there’s no excuse for Joshua to fail to do this.

I tried to get Joshua’s side of the story, but he responded to me with claims that I was an evildoer and a voyeur for listening to what was said. Having been so fiercely rebuffed by Chavez, there’s not much else to say. By default, we must accept the accusations as true until given better evidence.

Joshua Chavez made a vow to God to be a good husband to Joelle.

He then broke that vow.

Joshua might claim extenuating circumstances, but that does not change what we know that he did. Making a vow to God and then breaking it, is a very serious thing. A Christian is not allowed to do that. And, if he refuses to do anything to fix this situation, he remains in his sin and does not appear to be a brother in Christ.

Husbands, likewise, dwell with them with understanding, giving honor to the wife, as to the weaker vessel, and as being heirs together of the grace of life, that your prayers may not be hindered.

None of claims by Joshua changes his responsibility in any way – even if his allegations were true. He made a vow to God. And, unless he has proof that Joelle was already married to someone else at the time of his vow, he is required to be a faithful husband to Joelle. There is literally no other option for Joshua.

I find it ironic that Joshua has appointed himself to be a minister of rebuke to the Body of Christ, while demonstrating that his righteousness is as dishonest as Jacob’s.

I am glad that Joshua has revealed the sins of James Aloysius Prasch. The Body of Christ will benefit from knowing about Moriel. But, that doesn’t change the sins and bitter heart of Joshua Chavez. He needs to repent and fix the damage that he has done.

Lord willing, I will be writing on Spiritual Narcissism, tomorrow.