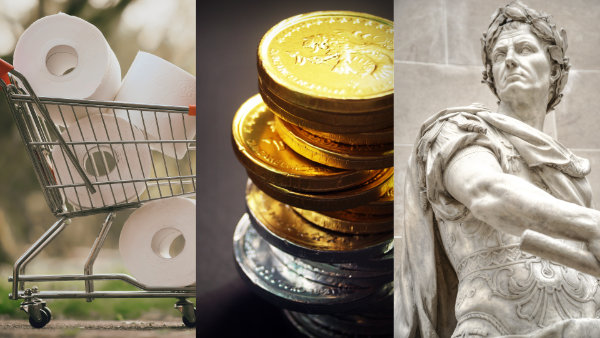 I’m going to say something true, but so controversial that you need to be sitting down when you read this:

There would be no worldwide lockdown, if the Elites were winning.

The global elites have been trying to take over the world, step-by-step, since the beginning of time. The previous two centuries has been good to them, but their strategy has begun to fail – which is why they have jumped on this non-pandemic in a desperate gamble to win it all:

They’ve run out of time.

Their gamble is failing.

Unfortunately for you and me, there is suffering ahead for all of us.

Due to recent attacks on the Omega Shock server, I’ve had to spend most of the past nine days doing nothing but programming to neutralize the attackers and fighting with my web hosting provider. Lord willing, the hard part is over. But, you will notice a few changes, such as a different subscription link and a new contact page. Those of you who have Yahoo email accounts are blocked from receiving The Shock Letter, and I’m working hard to get them to stop that.

There are truly evil people in the world, and it takes a lot of work to stop them.

Have you wondered why the global elites chose to do so much damage to the world economy by locking everything down?

Do you think that they would have done this, if they felt that they were winning?

Right. I don’t think so either.

Where The Elites Came From

The Renaissance that began in northern Italy brought in more opportunities for wealth and power. Then, the ‘New World’ of North and South America were discovered, and the wealthy and powerful rushed across the Atlantic. Growing wealth helped create the Age of Enlightenment, which then spawned bloody revolutions. Wealth grew even more with the first industrial revolution, powered by coal – followed by the second industrial revolution, powered by oil. Then came the wars.

Their Common Enemy – You And Me

However, they all had a common enemy:

And, as time went on, we became more and more of a threat to their power. Over time, our knowledge and understanding improved. We picked up dangerous ideas, like liberty, equality and personal rights. Better and better technology gave us more free time to think and ponder. We hired more teachers, more scientists, more librarians. We printed books and read them.

How They Tried To Control Us

The wealthy had their own ideas about how all this should work, so they funded those that they agreed with, like Charles Darwin and Karl Marx. They founded publishing companies, like the Lucifer Trust – a name they eventually changed to ‘Lucis Trust‘. They founded Universities and libraries. When radio became popular, they funded radio productions. Then movies. Then television. Then, the Internet.

The wealthy had their finger in everything. And, you can see a snapshot of what I mean in a video that YouTube keeps trying to take down:

Yeah, greed creates corruption. LOTS of corruption. As economies grew, wealth increased and new forms of wealth were created. And, alongside all of it, came ever-increasing corruption. And keeping that corruption secret eventually became a serious problem for the elites.

Then came the Internet. The wealthy were late in their attempt to control the Internet. They didn’t understand it, and many of them still don’t. And, with the Internet, the story of their corruption has become far too visible. Too many criminals are not going to jail. Too many bankers are getting away with murder. Too many politicians are showing their price tags. Too many industries are getting protected and bailed out. And, too many lies are being questioned. That last one is the most important.

Too Many Are Questioning Their Lies

The lies peddled by the global elites don’t make a lot of sense, anymore. Yes, a lot of people still believe their lies, but far too many are questioning them.

They first called it Global Warming, but too many realized that the world wasn’t getting warmer. So, they changed the name to Climate Change, but change is pretty normal. So, they’re having problems with that one, too. There just aren’t enough of us who believe that a tasteless, odorless gas like CO2 (that is vital to plant life) is causing to the world to get warmer. We don’t believe it, and that scares them.

So, when another opportunity arose to terrify us into submission and ram through greater control of our lives, they jumped for it. It was one last throw of the dice to gain control and preserve their power.

Oh I know that the mainstream media is still pushing the pandemic narrative. Your idiot neighbor is too. But, there are far too many people who have not joined them, and there is a distinct sound of desperation in their voices – particularly Klaus Schwab, the founder and head of the World Economic Forum.

Klaus is one of the most prominent underlings of the global elites. He seems to act like he’s one of them, but I doubt that he is. But, he’s a very intelligent man who is deeply connected to the most powerful people in the world. So, if he isn’t a member of the elites, he is at least their voice.

Just by the way that he talks, Klaus Schwab and his World Economic Forum are in full panic mode. If you want to hear him, yourself, go to their web page for the launch of their Great Reset Initiative:

(Big thanks to Tony at A Minute To Midnite for pointing this video out.)

The main video on that page is 79 minutes long and full of nonsense. But, some of the nonsense is chilling. (Except for Prince Charles. He was pathetic.) But, all the ‘panelists’ in that video were just window dressing for Schwab himself. And, he spoke at these three time marks:

Listen to more than just his words. Listen to how he talks. It should not take long for you to see that he is deeply unhappy and genuinely fearful about the future. Yes, he sees an opportunity, but he’s not enjoying it.

Oh, and one other thing. It should be clear about what is in that video:

What will they say next?

They Are Hiding The Decline In Energy

You can be absolutely sure that what they tell us will be a lie. And, they have put so much time, effort and money into their lies, that they are unable to turn around and tell us the truth that they are hiding.

What are they hiding?

The real decline in energy.

It is the one thing that they will not and cannot talk about. If they do, their world – and all that they have worked for – will fall apart. If the availability of coal, oil and natural gas declines, it will be the end of their New World Order, and that is the one dream that they just cannot give up. Their problem is that they can’t do anything about it.

They have already tried to convince people to ‘reduce carbon emissions’, and everyone ignored them. They made a gigantic hullabaloo over polar bears, rising sea levels and cow farts, and no one paid them them serious attention. Yes, articles were written. Speeches were made. Laws were passed. They even spent money. But, nothing actually happened.

Because deep down, no one believed them.

Then, along came a bat virus that they grabbed on to like it was their last hope. And, maybe it is. Maybe this virus is their last opportunity to salvage a new New World Order from the wreckage of their hopes and dreams.

Unfortunately for this batch of clueless elites, they will crash and burn. And, their fall will mean the collapse of civilization as we know it. What rises from the ashes will be a whole new world order, something that Jesus and the prophets talked about.

…and it will NOT be a fun time to be alive.

So let me end with how I started this:

The elites would not be pushing a global lockdown…

…if they thought that they were winning.