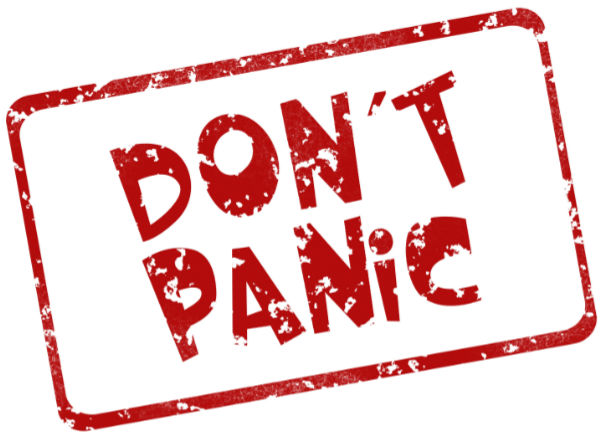 From where I sit in Taiwan, ground zero for the Wuhan Virus is 1028 kilometers away – or 639 miles. And, with all the businessmen and tourists going back and forth between here and China, we’re at the front lines of this issue. And, we are NOT running around with our hair on fire.

Unfortunately, some people have chosen hysteria over logic.

This presents us with a great opportunity to learn how to be rational, when everyone else is losing their mind.

The Wuhan Virus – A Lesson on Hysteria

The Wuhan Virus – A Lesson in Hysteria – The ShockCast

You’ve heard that we are all going to roast, boil and then drown because of man-made global warming. The mainstream media, Democrats and Swedish teenagers are in a panic over the end of the world because we are putting too much plant-food – CO2 – into the atmosphere. And, for 40 years we were all supposed to die in 12 years. First in 2000. Then in 2005. Then we were REALLY going to die in 2012. And boy were we going to die in 2020. Now, it’s… well …we’re just gonna’ die.

And yes, they really believe this stuff.

Of course, those are the morons on the left, and we would never be as crazy as they are, right?

Our inboxes are being flooded with hysterical conspiracy theories from lots of well-intentioned folks who worry that the Wuhan virus will be THE BIG ONE.

The Chinese Government Is Run By Morons

So let me get this out of the way:

If you are not in China, you will be fine.

And, the biggest reason why you will be fine, is because you do not have a government run by mainland Chinese officials – who are morons. And yes, I really mean morons. I love the Chinese people. I’m married to one. But, I’ve never seen such stupid government in all of my life. And no, I do not want to turn this into a bashing-China session. But, I do want to make an important point:

This virus would NOT have EVER been a problem if the local and national governments of China had handled this properly.

Unfortunately, Chinese government leaders are chosen for their willingness to ‘save face’ for the Chinese Communist Party (CCP). No matter how stupid you are, if you are good at protecting the reputation of the CCP, you will do well. And Wuhan, one of the biggest cities in China, is no exception.

Wuhan is the capital city of the Hubei province and is the major transportation hub for central China. If you are traveling east-to-west or vice-versa, you will go through Wuhan. And, this makes the mishandling of this outbreak even worse. Trying to quarantine all of Wuhan would be like trying to lock down Chicago. It just isn’t going to happen.

That’s why this Wuhan Virus (aka, 2019-nCoV), has now spread to the surrounding provinces and is probably everywhere in China, except Tibet – which has been locked down for other reasons. And, the morons running Wuhan could have stopped this virus cold with an early quarantine and information campaign. They knew about this virus and where it was coming from in December, but chose to do precisely nothing.

Where did this virus come from?

Here in Taiwan, we began hearing about unusual cases of pneumonia in December, but we were so caught up in the election that we didn’t pay much attention. But, once the election dust settled, we started getting more and more reports. One guy, an HVAC specialist, started telling us to stockpile surgical masks – weeks ago.

It was only a matter of time before headlines started popping up in the hysterical mainstream media. That’s when the morons in Wuhan chose to act.

What did they do?

They evacuated the Huanan Seafood Wholesale Market and scrubbed it clean, without saving a single sample for microbiologists to examine. So now, we don’t know what animal has been harboring this virus. Then, the morons-in-charge decided to throw a communal dinner nearby, where everyone would pack together, share food from communal dishes and cough in each other’s faces.

There was not one word of ANY need to engage in ANY kind of quarantine. No messages to wash hands. No broadcast of the need for surgical masks. No mention of the wisdom in avoiding crowds. Nothing.

All of that changed on Monday, when Winnie the Pooh, himself – Xi Jinping – stood up to announce on January 20th, that WE SHOULD DO SOMETHING. His exact words were somewhat different, but you get the point. (And, Mrs. Little says that I’ve now been banned from China, for saying that.)

NOTE: Great videos on the topic, below

Get Off The Conspiracy Theory Bandwagon

Now, for those of you climbing onto the conspiracy theory bandwagon, the Wuhan government isn’t smart enough to engage in a conspiracy, and they certainly couldn’t keep it secret, if they did.

Never attribute to malice that which is adequately explained by stupidity.

I have spent decades studying how people and societies work. And, you can never avoid looking at their governments while doing so. And, I have discovered that governments in general are amazingly stupid. How Israel’s government is able to achieve ANYTHING is a miracle – ‘cuz they’re stupid, too. But, not too many governments are stupider than the one in Wuhan. But, I’m using logic here. Most riding the ‘conspiracy theory bandwagon’ aren’t.

I’m seeing more and more people claiming that this is some kind of bioweapon. If that’s you, STOP. A coronavirus is the wrong kind of virus for a bioweapon. It’s not contagious enough, and the death rate is WAAAY too low. And, we have plenty of nice and deadly viruses and bacterium to choose from that would do far more damage than this Wuhan Virus. So, stop the insanity. In fact, let’s throw a little logic at the hysteria.

Remember that this virus is a coronavirus closely related to SARS (Severe Acute Respiratory Syndrome). SARS infected 8,000 people and killed less than 800. While a 10% death rate is high, it is not nearly as lethal as Ebola. Therefore, even if this virus is ’10 Times Worse Than SARS’, as many headlines are screaming… it will be less deadly than Ebola and will kill fewer people than the common flu – which kills about 600,000 people every year.

This doesn’t mean that the Wuhan Virus isn’t dangerous, or that we shouldn’t pay attention to it. This is why governments outside of China are proceeding quickly to re-institute the screening of passengers. For instance, Taiwan has restarted the temperature scanning of anyone entering the country, the same procedures that were instituted during the SARS outbreak – which were still in effect when we first came to Taiwan. So, we can expect that this virus will probably be contained.

So, if you are coming to Taiwan, you’ll be fine.

I’m willing to bet that every other country in the world is jumping to do the same thing. The irony is that China probably won’t be screening any outgoing passengers. They didn’t during the SARS outbreak, so don’t expect them to start now.

The Biggest Problem – The Average Chinese

Personal hygiene in China is really bad – almost at Third World levels. They don’t wash their hands. They spit massive gobs of phlegm onto the streets – splattering anyone nearby. They let fly with sneezes and coughs, without covering their mouth in any way. Food handling is horribly unhygienic, and their idea of a clean plate is… (shudder).

For the first couple of years of our marriage, when we would stop by a Chinese grocery, I never understood why Mrs. Little would never buy any food imported from China. Now, I know.

And, I really don’t like talking about the Chinese like this. But… they just don’t understand the value of cleanliness. They don’t get the whole ‘food safety’ thing, that I learned at a pretty young age. It’s as if they’re were trying to get out of the Dark Ages, and got stuck.

I honestly like the Chinese people. I really do. And, when they do something stupid like this, I have to keep telling myself that they don’t understand why their decisions are such a bad idea. And, I’ve barely touched on some of the utterly insane things that the Chinese have done.

To Help Others Wake Up, Calm Down First

So, let’s all take a deep breath and calm down a bit. Don’t get caught by the morons spreading hysterical theories about how this virus will kill millions and destroy the world. And, this is only one of many hysterical topics that people need to step away from.

I’m looking at you, Flat Earthers!

Yes, we ARE in the Last Days. One day, things will get really bad. And, I have been warning you about them. Ezekiel’s Fire really is coming and billions really will die. But, if you are driven hither, thither and yon by every hysterical headline, you will soon be unable to prepare for the truly difficult days ahead. You will also lose all credibility in the eyes of those who might listen to you.

Do you want to help your family, friends and fellow Christians survive the dark days ahead?

Then, start now by being rational and level-headed. And, Paul said something along the same lines, here:

For God hath not given us the spirit of fear; but of power, and of love, and of a sound mind.

You cannot help those who need it most, if you have discredited yourself. Please start right now to demonstrate that following Christ means being sober, levelheaded, sensible, stable, prudent, wise and unafraid. After all, He that is with us, is greater than any microscopic bug.

Oh, and please, above all… share the Good News of Jesus Christ, with EVERYONE!

For more information on the topic of the Wuhan Virus, watch these two videos:

China’s Coronavirus is Much Worse Than You Think (Jan 22nd)

Both of these men really understand what is happening on the ground in China. I’ve been watching these guys for years, and they’ve always been spot-on about China.

12 thoughts on “The Wuhan Virus – A Lesson in Hysteria”