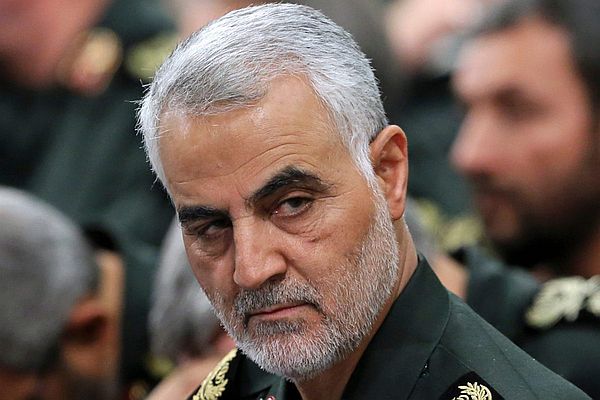 General Qasem Soleimani was one of the most brilliant special operations commanders in recent history. Dedicated. Talented. Charismatic. Tireless. Dependable. Honest. Devoted to his men and to the cause of the Shiite Islamic Revolution of Iran. And, all of that means that he was a threat to Israel, The US and the Middle East.

He had to die, because Iran is at war with the US. And, that war has been ongoing for 40 years. Even if the US had not invaded Iraq, someone would have needed to assassinate him for the safety of the region.

The fact that he was a war criminal and a terrorist is secondary.

General Suleimani is Dead. Good. Here’s Why. – The ShockCast

I hate war with a passion. The damage that it does to men, women and children is indescribable. It also gives the evil the chance to increase their wealth and power. And because of that, war is one of Satan’s favorite tools. But, it is also true that when Satan rises, good men and women must stand in defense of the innocent.

There is a quote from Edmund Burke, a British politician who tried to stop Britain from abusing the the American colonies. He said:

“The only thing necessary for the triumph of evil is for good men to do nothing.”

― Edmund Burke (in a letter addressed to Thomas Mercer)

I’m betting that Edmund also hated war, but would have undoubtedly seen the need to engage in it when Satanic evil was on the rise. And THAT is when war is just.

Was the invasion of Iraq, just?

Many supported the invasion of Iraq out of ignorance and the mistaken belief that Democracy solves everything. Unfortunately, in the Middle East, only Jews and Christians can have anything like a successful democracy. Every attempt to create a democratic society in the Islamic Middle East has collapsed into corruption and authoritarian despotism. No exceptions. We didn’t understand that, and the cost has been extremely high.

Saddam Hussein was evil, but the alternative was worse.

We now have the alternative.

Unfortunately, we would have needed to kill Qasem Suleimani, even if the US had not destroyed Iraq. As I said before, he was dedicated, brilliant, charismatic, tireless, dependable, honest, and devoted to his men and to the cause of the Shiite Islamic Revolution of Iran. All of those characteristics are admirable, except for that last one.

NOTE: The way that the mainstream media describes the targeted killing of Soleimani is incorrect. Yes, he was killed by a Hellfire missile shot from a drone. But, that missile could not have hit its target without the help of a special operations unit, on the ground, directing the missile to its target in some way. The mainstream media wants you to believe that drones have an almost magical ability to identify and destroy targets, unassisted. This is not the case.

Now, back to the main point…

Anyone who is dedicated to the cause of the Shiite Islamic Revolution of Iran, is someone who is dedicated to evil. There is literally no way to get around that fact because Shia Islam is the most genocidal form of Islam on the planet. The only thing that is keeping them from killing billions of people, is their lack of ability to kill billions of people. And, they have been openly proclaiming this intention to commit genocide for 40 years.

I wrote about this in June and July of last year:

Iran is Completely Insane – The Details Confirm It
https://www.omegashock.com/2019/06/23/iran-is-completely-insane-the-details-confirm-it/

And, there’s more to write on this subject, which is why I pretty much stopped everything to write this book:

I literally could not continue to write about how big a threat that Iran is, without establishing the number one reason why she is such a threat. And yes, it has everything to do with Bible prophecy. Unfortunately, you need to read that book. Even if you already understand the key points, you will still see some things that you hadn’t seen before. I know that I did.

When your life, and the lives of those who you love are at stake, you need to do what you can to be ready – and that means reading When Jacob Returns.

Unfortunately, the Bible does not describe America winning its war with Iran, and I describe some of the reasons, here:

And… the morons in Washington, D.C. haven’t gotten the memo. John Bolton still wants to invade Iran, and the psychopaths like him want to do the same. Bolton doesn’t care about how many Americans will die in that war. He just wants power for he and his circle of psychopaths. To he and his friends, war is good, and if war is good… more war is better.

Now that I think of it, John Bolton is probably responsible for the deaths of more Americans than General Soleimani.

What an ugly fact.

Anyway, if America cannot win a war with Iran, what can it do?

Well, it can use the Israeli strategy of not losing.

I’ve been studying how Israel fights wars since I was a teenager. It’s actually how I was introduced to the idea of Israel in the first place. I had been voraciously reading firsthand accounts of combat in World War II, and was interested in looking at more modern examples of war. And, Israel represented an unambiguous example of the battle between Good and Evil.

And, even though war is evil, it is still fascinating.

The thing about Israel’s wars, is that they never actually win. Yes, they have always achieved victory, but her enemies were never conquered. In 1948, 1956, 1967, 1973, 1982 and in all the conflicts in between, the enemy always survived more-or-less intact. And, even though Israel was always blocked from destroying her enemies, it’s uncertain how such a tiny country could actually destroy Egypt, Syria and Jordan without being destroyed in turn.

There have always been limits to how victorious Israel could be, in fighting her enemies, and I believe that her generals understand this. And, they have perfected a strategy that makes the price of war so high for her enemies, that they choose peace instead of conflict.

I don’t want to get out into the weeds on this idea, since our subject is the elimination of General Soleimani, but suffice it to say, that the killing of this general is right in line with how Israel engages with her enemies. In Israel’s case, the purpose of such a targeted killing is to degrade the capabilities of the enemy. And, Israel must do this constantly.

Israel is always analyzing the capabilities of her enemies and seeking to weaken the strength of those enemies. And, one important way to do that is to kill those commanders who are most the capable, and to leave alive those who are inept and ineffective. Foolish enemy officers and politicians are a valuable asset for Israel, but those officers who are capable need to be identified and destroyed as quickly as possible. In America’s war with Iran, this should be the guiding principle when seeking victory over the Shiite Islamic Revolution of Iran.

Again, America did not choose this war. The reason for this conflict lies entirely with the Iranians. They started it 40 years ago, and it will not end until either America or the Ayatollahs are destroyed – or both. This is the nature of jihad, and America must accept this, if she is to have any hope of success.

Fortunately, the targeted killing of Major General Soleimani seems to indicate that America is beginning to understand how to stop Iran from capturing the Middle East. They’ve killed an extremely capable enemy officer, where his replacement – Brigadier General Esmail Ghaani – seems less capable. From what I have seen, Ghaani lacks much of what made Soleimani dangerous. And, if Ghaani is ineffectual, America should be careful to keep him alive.

For those of you looking for more understanding of this event from a Christian perspective, I recommend these two videos from David Wood:

I’m sorry, but I just can’t help myself. David Wood’s outlandish sense of humor is just the kind of thing that we all need. The morons bleating in terror, running around with their hair on fire, need to get a grip and calm down. Watching David Wood videos, might help them do that.

Also, that second video shows that General Suleimani had engaged in the mass killing of innocent Iranians. He brought in Hezbollah fighters to kill protestors who were calling for less corruption and better living conditions. Some of us have known that Iran has done this a lot, and it is pure evil. For this, and for the many other atrocities that he has committed…

In the end, I know that all of this seems to be in opposition to our Christian faith. And, I understand how offensive this can be to even talk like this. Even for me, as interesting as the strategies and tactics of war are, the need for it is a vile and evil thing.

Unfortunately, our desire for peace and our need to protect the innocent, requires us to stand ready to fight those who wish to steal, maim and kill. I know that America is not a Christian nation, but we Christians still need to do our best to defend the innocent from those who are evil. The fact that America has too often been on the side of evil, grieves me deeply, but that’s a question for another time.

In the end, General Qasem Soliemani was a terrorist and a war criminal who needed to die. I’m sorry that it was necessary, but my own feelings don’t matter. Too many lives were at stake, and evil could not be allowed to prevail.

18 thoughts on “General Suleimani is Dead. Good. Here’s Why.”