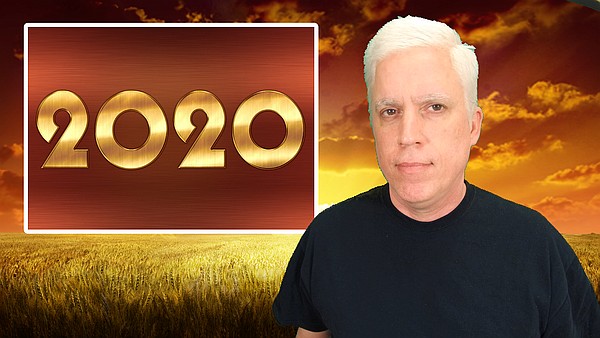 I never thought that I would make a prediction like this, but here I go:

That’s a lot of ‘prediction’ (especially that last one), so let me get started.

Wow. I never expected that we would get this far. I have been writing Omega Shock articles for eight years, and it always seemed that financial collapse was just around the corner. For those of you watching closely, we came close in 2015, but we stayed ahead of the doom that we were all afraid of. And, 2020 will be yet another year to put in the record books.

Did you know that there are more $100 bills outside of America, than inside?

It has become the most popular unit of currency in the world, and lots of people are grabbing them. Lots and lots. And, with the strength of the US Dollar and US Dollar assets, comes…

Yup, he’s going to win again. The Left will shriek, howl and moan, but that won’t change the fact of he will win re-election. Those who support ‘The Donald’ will be very happy. Unfortunately, the Deep State will do their very, very best to try and stop him. And, I’m afraid that assassination attempts will increase and… eventually succeed.

They’ll probably make it look like an accident. There are plenty of toxins that have a very short half-life in the blood stream, and no one does assassination better than the CIA. And, the reasons why they will kill Donald Trump will be much the same as the reasons why they killed JFK.

JFK was reluctant to go to war in Southeast Asia, and Donald Trump doesn’t see the point in keeping the war in Afghanistan going. And, the CIA is desperate to keep control of that battered country, especially Helmand Province.

If you want to know WHY the CIA is intent on the control of Helmand Province and the rest of Afghanistan, go here:

The CIA Criminal Empire that Started with Operation Gladio – The Weekend ShockCast
http://www.omegashock.com/2019/04/29/the-cia-criminal-empire-that-started-with-operation-gladio-the-weekend-shockcast/

And, if you want to see it up-close and personal:

I never did get to the other parts of that ‘CIA Empire’ series. But, you could probably guess what I was going to say, if you went through my series on Operation Gladio.

…where did you think that the CIA got all of their money for their takeover of mainstream media?

How do you think they were able to fund MKULTRA and all of the other deep black operations that didn’t have any congressional oversight or congressional funding?

Well, when you are making a Trillion dollars a year selling Heroin, you can do almost anything that you want. And they did. And yes, that’s Trillion with a nice big T. But, that’s a story for another time.

The point is that the CIA cannot let Donald Trump know about their connection to the Heroin trade. But, the more that he pushes for troops to be pulled out of Afghanistan, the more that they will try to stop him. And, he will NOT be allowed to wonder why they are so dead-set against the pullout.

If he isn’t, it’s only because he has made a deal with the Central Intelligence Agency to protect their Heroin trade.

While I am not a fan of Donald Trump, I do not oppose him. I like a few of the things that he has done. I am disappointed in the fact that he has not done more. But, the thing that I like about him the most, is that he makes leftists go berserk. Watching morons embarrass themselves is one of life’s many pleasures, and I appreciate Donald Trump for providing us with so much entertainment.

However, even if he was an awful, evil president, I still would not want him to be assassinated, or become a tool of the CIA.

Again, the reason why Trump will get re-elected, is the US financial markets. As I said before, the US is the least dirty shirt in the dirty shirt pile. Economies around the world are not doing as well as before, and the rich are taking their money and throwing it at the US. It has nothing to do with the fundamentals of the US stock exchanges or the bond market.

However, confidence in the US will eventually begin to wain and then collapse some time after 2020. When that happens, the dramatic rise of America will reverse. Martin Armstrong is predicting that to happen in 2022, and his writing has been extremely depressed about this:

Martin finishes that article this way:

I am thankful I am not 25. But I lament for my posterity whose future will never be what I experienced.

He’s doing his best to head off our rendezvous with destiny, but I’m afraid that our doom will not be averted. I’m just glad that we were able to enjoy the time that we had. It was a good run. We did some great stuff. But, we became depraved.

That depravity will continue to grow ever worse in 2020. If you thought that 2019 was bad, look out below! School children will be encouraged to have sex at younger and younger ages. Homosexuality will increase. Promiscuity will rise. More and more Christians will be forced to disconnect from the mainstream, to protect themselves and their children.

Unfortunately, far too many Christians will give in to the temptations of society. Many will give up Christ altogether. The de-Christianization of the West will reach greater heights in the coming year as more and more ‘christians’ forsake God. Part of the problem will be the churches giving up on truth, sanctity, righteousness and the love of God. The Joel Osteens of this world will do very well indeed.

We will also see more and more bloodshed and brutality around the world. The call to violence from the Left is starting to get attention from those who have been unable benefit from the global economy. We’ve already seen uprisings in Chile, Argentina, France, Hong Kong, Iran, Algeria, Venezuela, Iraq, Sudan, India, Lebanon and a host of other countries.

Yes, many of those violent outbursts have been political, but politics always follows personal economy. The French Revolution would never have happened if everyone in France had been eating well. Likewise, the revolutions that shook the world, such as in Russia, China and India. A good economy always trumps political ideology.

On a more personal note, 2020 might mark the end of Omega Shock – or at least a dramatically reduced involvement in writing and producing videos. My wife and I cashed in our retirement accounts, converted our savings and left America to do evangelism in January of 2010. And in the following year, 2011, I discovered that catastrophe was in your future.

This is why I reduced some of the evangelism that I was doing to try and warn all of you about what was coming. Sharing the good news of Jesus Christ will always be more important than geopolitics, so it’s been hard to write Omega Shock articles while doing Bible studies, teaching classes and handing out Christian materials. However, I could not abandon my brothers and sisters in Christ to their fate, when I knew that true disaster was coming.

One day, the power will go off.

Well, I am dedicated to seeing that you do, and I hope that you will redouble your efforts to prepare during the prosperity of this year and even the next. Unfortunately, I’m not sure that I’ll be able to offer much help or advice for too much longer.

My finances will have hit rock bottom by the end of this year, and it’s time to do something about that. I will be doing what I can to keep Omega Shock alive, but I am uncertain about how that will work. Over the coming weeks, you will see a donate button appear. I will also be taking the two books that I’ve already written, reorganizing them and putting them up for sale on Amazon. I expect that a third book will also appear sometime over the coming months. I might even dabble a little bit in advertising for those products that I use and believe in. However, I despise most of the ways that products are marketed these days, so don’t expect too much of that.

I will also be resurrecting The Write Group. It has been ten years since I gave up my last writing gig, and it might be time to jump back into that game again. Writing computer manuals is not my idea of a good time, but it pays the bills. One of my favorite preparedness geeks is James Wesley Rawles, and he’s a fellow technical writer. And, if THAT doesn’t work out… well …you’ll probably find me teaching English to the most adorable rug rats on the planet. My wife and I love kids, so we’re cool with that.

Mrs. Little and I know that our financial future is assured because God knows what He’s doing. I just don’t know if it’s God’s will that I continue writing Omega Shock articles and producing videos. We’ll find out in 2020.

By the way, Omega Shock is not cheap to maintain. The server that this website sits on costs about a thousand dollars a year. That’s on top of the software, the hardware and the ISP service that we have had to pay for.

We’ve lived pretty carefully, but even ‘carefully’ has its limits.

Well, that’s it for my view of what will happen in 2020. Please let me know what YOU think will happen in the coming year. I always look forward to reading what Omega Shock readers and ShockCast viewers have to say. So, please leave a comment below and share your thoughts.

Oh, and for those of you who missed my previous post about my new book, you can find it here:

And, you can find the ‘book’ itself, here: