I started Omega Shock because I realized, in 2011, that you were in a lot of trouble, because of the threat of EMP attack. As I dug into the threats that you face, I saw more threats that were just as horrendous. Now, these threats are coalescing into a single moment in time, and your life stands at the brink of the destruction that is coming.

Oil production is collapsing. You don’t see it yet, but it is happening right now. The signs are everywhere, if you are willing to see them.

The financial collapse that is almost upon us will reveal that oil production collapse.

Satanism is on the rise and righteousness has crumbled in our churches.

Get ready for the end of the world as you know it.

I could have titled this article in many different ways. I’d thought of borrowing from Sarah Palin’s ‘Stick a fork in us, we’re done.’ Other possibilities come to mind, but I think that this one is best.

Well, we’ve fallen off the cliff, but we haven’t hit the ground yet. Everything will feel fine until we finish our fall. Any moment now, and our destiny will become all too real.

What is it that has pushed us off of this cliff?

The collapse in oil production. It has already started, but you don’t feel it yet. That’s why you are probably feeling a bit surprised at what I am saying. The gas still comes out of the gas station pumps and into your gas tank. The price hasn’t changed much.

THIS is the problem: 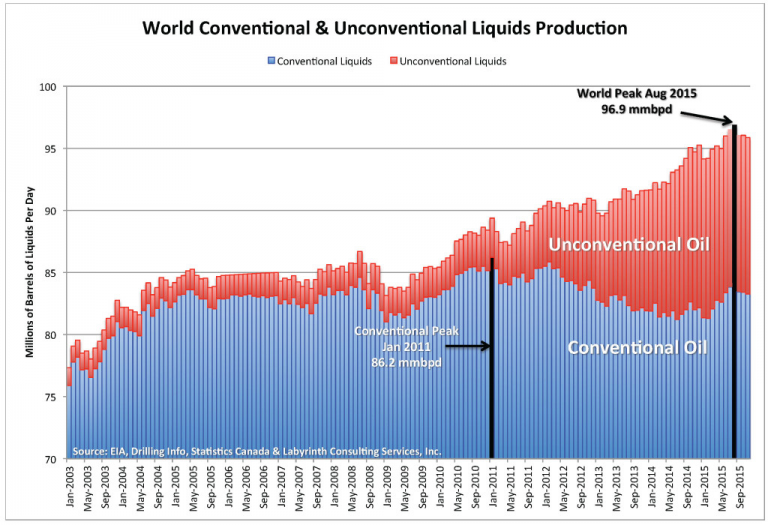 That graph comes from this article:

The Foundation Of The Financial Markets Took A Big Hit In 2015
https://srsroccoreport.com/the-foundation-of-the-financial-markets-to-a-big-hit-in-2015/

That is more than just a ‘hit’. THAT is a cataclysm.

Look at the red in the graph. That’s unconventional oil production, which means fracking, tar sands, etc. And, right now, the frackers are in a LOT of trouble, financially. They were only able to operate because they had HUGE loans. But, now they are going bankrupt.

What will happen to the production of oil when the frackers go bankrupt?

Initially, nothing. Because their wells may still keep pumping. The biggest cost to fracking is the cost of drilling the well. Pumping doesn’t cost much. But, those wells dry up very, very quickly. In just months.

What will happen when all those frackers go away?

Why will oil production dry up quickly?

Our Economy MUST Die

Let me repeat that:

The only way to reduce our oil consumption is to destroy our economy.

Our economy is based upon oil. For every calorie that you consume, it took 9 calories of energy to produce it. As oil production falls off… your cost of food escalates. As oil production falls off, people won’t be able to live an hour’s drive from their place of work. Companies won’t be able to ship goods cheaply, and their materials cost will go up.

If you want to understand all that – and you need to – watch this video:

There’s No Tomorrow (limits to growth & the future)

That video is only about 35 minutes long, and you must internalize the points in that video.

Ignore the lessons of that video, and the cost might very well be your life and the lives of those that you love.

And yes, it is THAT serious.

My intention was to write something else today, but seeing that SRSrocco article… well, it was too big. That graph is terrifying to those who understand the implications, and it’s one of the reasons why I always check SRSrocco on at least a weekly basis, especially before sitting down to write.

Now, let me try and sweep away a bit of foolishness that continues to make the rounds. Some are making the case that oil is not a fossil fuel, but is produced continually, deep underground. I consider this to be an extremely foolish theory, but I won’t go into why that is.

What I will go into is the reason why abiotic oil formation is immaterial to this issue.

How long did it take for this ‘abiotic’ oil to coalesce into underground pools of crude oil?

So, it takes THOUSANDS of years for oil to form.

How long have we been pumping it out of the ground?

About a century and a half.

Does that tell you that ‘Abiotic Oil Theory’ doesn’t matter?

Yeah. Unless you have thousands of years to wait before filling up your gas tank.

B-But There’s Still Lots Of Oil Out There!

Some people claim that there are lots and lots of oil still out there, and this is true. But, what people fail to realize is that the cost of GETTING that oil is too high. It would cost in oil would be as much as the oil that you produced.

Remember that Peak Oil doesn’t say that the oil is gone. What it says is that all the cheap-to-get oil is gone. There’s still some cheap oil left. The Gulf Arabs have some. So do the Iranians and Russians. Others have a bit too, but less and less.

This really is where the rubber meets the road. Over the coming months the collapse in oil production will make itself felt at the gas pump and the grocery store. When you see it happening with your own eyes, it might be too late to do anything about it.

We no longer have a ‘Peak Oil Theory’.

We now have a ‘Peak Oil Fact’.

Thank you for those of you who have been concerned about the earthquakes here in Taiwan. I appreciate that. We’ll need to see 7.0 earthquakes before seeing real damage, although corrupt construction can cause collapses with smaller quakes.

The good thing is that everyone here in Taiwan is fine, even though the quake was pretty close to us. We really rocked and rolled with that one.

Satanism In The Republican Party

When I did a search about the origins of those upside down stars on the Republican elephant, George Bush popped up.

I’m sorry, but everything that I’ve read about the Bush family is horrifying. Those people are truly Satanic. They are Luciferians, through and through. THEY changed the orientation of the stars. And, there is no other explanation than Satanism.

I’ve got more that I could say, but I’ve said enough already. Please, PLEASE be ready for the worst. It’s not just your own life at stake. It’s also the lives of those that you know and love. Even more important, what is at stake is your ability to serve God.