The leadership of Syria has been vile and evil. They have sought to destroy both Israel and Jordan, and Jordan survives today, only because Israel mobilized her army in 1972 – to defend Jordan from Syria. Syria was heavily involved in the destruction of Lebanon. They supported every kind of terrorist on the planet. And, let’s not forget Hama. There’s a reason why they call rules for massacres like that “Hama Rules“. But, that was Hafez al-Assad.

His son is Bashar, and seems like a decent guy. Unfortunately, because of his father – and his father’s generals that probably STILL run the place – Syria has been destroyed.

And, I just saw it in a way that could not be ignored… yesterday.

Syria is No More

As I write this, it is Tuesday. I had other writing that needed to be done today, but my heart grieves me too much to do that. My heart is heavy, and I am sickened by the evil that is happening in Syria, right now.

The article that brought me so low, is this one:

The Russian foreign ministry said many things about the incident, but this was what got my attention:

“What is needed is not just words but concrete action,” the statement said, adding that “the shelling of the Russian embassy was done from the direction of Jobar, where the anti-government militants are based.”

I looked up Jobar. It’s a rather large neighborhood within Damascus. Those of you who have read Isaiah 17 more than once, understand the significance of the words:

And, the Russian Embassy in Damascus is about four kilometers (2.5 miles) away from Jobar, so it is easily within mortar fire range.

That made me sit up straighter in my chair, as I realized that the rebels had captured more territory than I had initially realized. So, I went looking for a map.

This one made my heart ache: 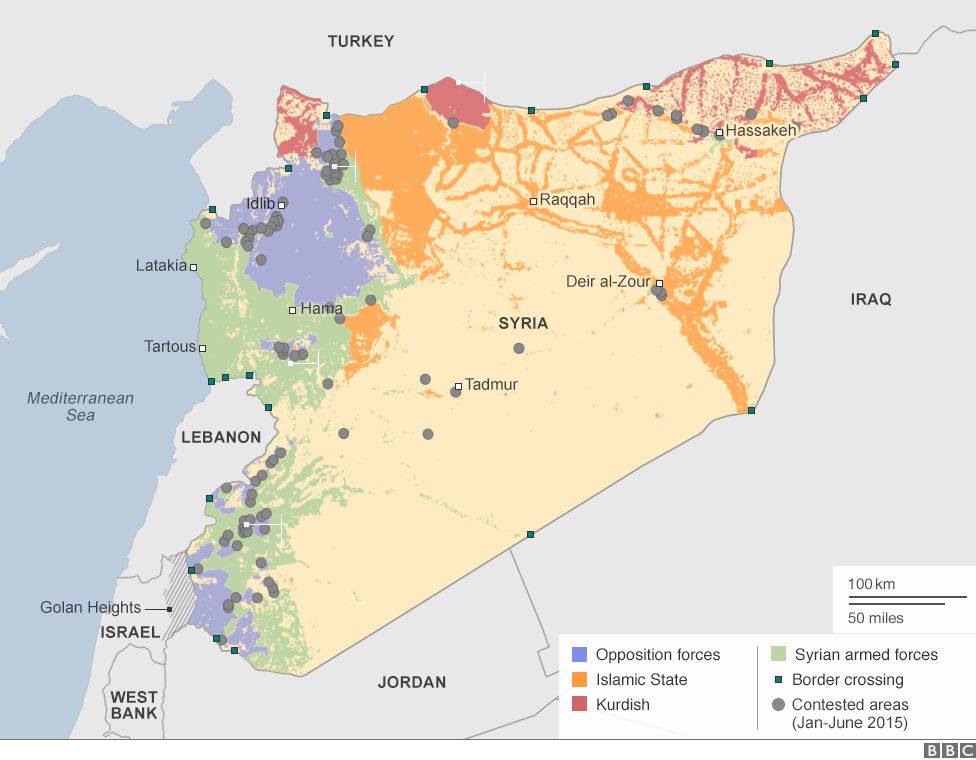 Areas of Syria, under control by rebels, Islamic State and Syrian government.

(The cream-colored areas are waterless desert.)

That map is from early July, 2015, and it is horrifying. It may not seem like that to you, because you don’t realize that no lives – and no one CAN live – in the yellowish/cream-colored areas of that map. The green/purple/maroon/orange is the only livable part of Syria. And, the green is the only part ruled by the government.

You can see that bit of purple down around the Golan Heights. You will also note that it also borders Jordan. The Jordanian Dairat al-Mukhabarat al-Ammah and the American CIA have been involved with most of that purple, but not all of it.

Israel has had a special relationship with the Druze of Israel. They are treated as equals in Israel, and they serve in the IDF (Israel Defense Forces) as officers and elite combat troops. Druze officers have even reached the highest levels of command within the IDF.

Major General Yusef Mishleb is a Druze and a testament to Israel’s willingness to incorporate non-Jews into positions of respect and responsibility. Israel has welcomed the Druze of the Galilea with open arms, and the Druze have reciprocated by being one of the most trustworthy groups of Israeli citizens.

I could go on about Israel’s relationship with non-Jewish groups within Israel, but there is one Druze community in Israel that has not supported Israel in the same way – the Golani Druze. The Druze in the Golan and in Syria, have tried to keep Israel at arm’s length, but the success of the rebels in Syria has made them feel vulnerable and push them closer to Israel’s orbit.

Israel has so far played a limited role in the conflict. They have provided medical assistance to the ‘Southern Front‘ – which controls most of that lower purple in the map. How much more they provide is hard to tell. The largest part of Southern Front’s support comes through Jordan – where the CIA is most heavily involved.

Mossad and the CIA have an extremely uneasy relationship, so it is unlikely that the CIA has much of a presence in Israel’s role in helping ‘Southern Front’.

Why is Israel involved at all with the ‘Southern Front’?

That’s an easy one. Syria has been the biggest threat to Israel’s survival for all of her history. They have hosted every terrorist organization threatening Israel. They shelled Israeli cities and towns from the Golan Heights. They invaded Israel three times, and even attempted to invade Jordan. They are Iran’s biggest ally, and the leadership of Syria have devoted their lives to the destruction of Israel.

To put it another way, the leadership of Syria would rather die than make peace with Israel.

If such a country was your biggest enemy, you would do your best to make sure that it was as weak as possible. And, THAT is why Israel is involved in giving support to these Southern Front rebels.

The Druze Must Ally With Israel To Survive

The problem is that Israel doesn’t actually want the Southern Front to win. And, they certainly do not want ISIS to win. What Israel would REALLY like is for the Syrian Druze to win.

The problem is that the Druze don’t want to win ANYTHING.

They just want to be left alone.

Unfortunately, ISIS wants them dead, and all the other Syrian rebels essentially feel the same way.

Here is the map of the Druze communities in the Middle East:

If the Druze are to have ANY hope of survival, they will need to ally themselves with Israel. And, this may be happening. I like the Druze, so I hope that they DO make the intelligent choice.

Even better, I hope that they accept Jesus Christ as their Lord and Savior.

There can be no hope without faith in Jesus.

Israel Will Be Sucked Into Fighting Against The Rebels

And then, it will suck Israel into the fight.

This happened to Israel, when pedophile-homosexual Yasser Arafat invaded Lebanon – with the support of Syria – and turned it into and cesspool of genocide, violence and corruption. Israel was sucked right into Lebanon, and then into Beirut. Israel wanted none of that, but wasn’t given a choice.

Well, the same kind of violence and destruction in Syria won’t give Israel very much choice, either. They will be forced to create a buffer zone in Syria, to keep them as far from the Golan as possible. But, I don’t expect that to be nearly enough.

Damascus Will Be Worse Than Beirut

Israel will have very little choice. She will need to push the rebels out of the ruins of Damascus – if there is to be any hope of peace in Israel. The CIA, Turkey and the Gulf Arabs who created this mess, will send their disgusting creatures against Israel, and Israel will have to root them out in the kind of house to house, street fighting that leaves few survivors of any kind.

Their accounts are horrifying.

But, as awful as that was, Syria will be worse. Much worse. And as Isaiah 17 indicates, Damascus will be unlivable afterwards. Those civilians who did not flee Damascus will die. The barbarians fighting over the rubble of that ancient city will turn their guns on Israel, and many Israelis will lose their lives.

Israel Will Be Blamed And Syrians Will Die

Yet again, Israel will be blamed for trying to defend herself.

And, I do not have words to describe how angry that makes me, or the grief that I feel for the coming suffering of the Syrian people. And, all because of evil men in Washington, Ankara and Riyadh.

And now, you know why I was so upset on Tuesday.

And, it was with that article, ‘Russia urges action‘ that produced this one. This is all very upsetting, even though it was prophesied in Isaiah 17.