Our route to tyranny follows a well-trodden path. It seems that dictators and despots have worked out of the same rule book throughout history. They are as predictable as they are murderous.

Unfortunately, we add technology to their penchant for persecution. Because killing a million people is easier than controlling them, our evil masters will do just that. Murder lies in our future, and we will only escape if we keep our heads.

But, our sanity can only be purchased through turning away from the one-eyed god in our living rooms, and turning towards God.

One day, we will look back and call this the beginning of The Great Persecution.

We’ve been here before.

I have stood and remembered fifteen times, and each time that siren has echoed with the wail of six million. Even watching the above video from the previous year… well …it still cut through me.

The forces of evil that created the Holocaust have risen again to create yet another. And, they never seem to change. The only difference is that they seem to get better and better at it. One day soon, they will use all of that acquired skill to make one final attempt to destroy all who name God as their Father.

Several months ago, when I was preparing to expose the foolishness of The Pre-Tribulation Rapture Lie, I wanted to illustrate a common misconception by changing the name of The Great Tribulation to something more accurate:

Because what we call the Great Tribulation is actually the great persecution of Christians, by the Antichrist.

However, when I did a search for “The Great Persecution”, I discovered Emperor Diocletian and the last and greatest persecution of Christians by the Roman Empire. So, I had to put my name-change on a shelf and think of another way to help educate fellow Christians. But, I also made sure that  Diocletian was also sitting on that ‘shelf’.

Then, just a few days ago, I stumbled over yet another reference to Diocletian. This time, it was Simon Black of Sovereign Man. He said this:

Under Diocletian’s reign, the Roman Empire’s body of laws and regulations multiplied like rabbits.

He centralized all aspects of the economy, controlling wages, prices, commerce, and agricultural activity. Violations in many cases were subject to the death penalty.

And when people complained, he told them that the barbarians were at the gate, and that individual liberty needed to be sacrificed for the greater good of security.

– Simon Black, PROOF that the US peaked during Ronald Reagan’s presidency

…where have we heard that before?

Oh, and this guy: The similarities are as fascinating as they are horrifying. It’s almost as if they are reading from the same book – which, of course, they are.

Less fascinating is the mind-numbing tendency of the average person – like you and me – to forget that genocide is normal. We have been enslaving and massacring each other for thousands of years, yet we seem to forget that, just in time for it to happen again.

And yes, it IS getting ready to happen again.

And yes, you HAVE forgotten how it happened last time.

And yes, you and I really ARE that forgetful.

And, here’s one man who won’t repeat those mistakes: 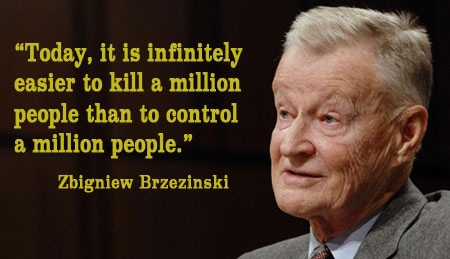 If that statement doesn’t chill you to the bone, I’m not sure that there is any hope for you. Satan and his minions want you dead in every way imaginable. And, they want the least amount of resistance, when they come to kill you.

They want you asleep…

They want you watching television…

They want you to concentrate on your job…

…when they come knocking on your door.

However, as I go through the editing process for my book, Ezekiel’s Fire, I am reminded that there is a God, and that He will thwart the ambitions of Satan. In a few short years, the biggest solar flare in the history of the world will come and temporarily flatten the New World Order that is rising.

You can read more about this prophecy that is straight out of the Bible, here:

That collapse has already started. But, as with all such things, it has begun slowly. It will gather speed over the summer and then hit us like a ton of bricks in the fall.

It is always possible that this run up to complete disaster could be extended into 2016. Or, it could come early. So…

…do you really want to play games with this?

Please understand that this collapse CANNOT be averted. It is not possible. And yes, I really do have an MBA and years of experience working in the investment field.

If you have your money in a bank, investment company, insurance company or any other institution of finance, you will lose everything. Furthermore, this will be a global reset. You cannot expect ANY institution to survive what is coming.

Please understand that reality doesn’t care about what you think. Ignorance is no defense against what is coming.

The only thing that you CAN do is prepare for the worst and hope for the best. You can read what I think about that, here:

Of course, those are my own – very limited – thoughts on the subject. You must seek the Lord on all of this, and follow His direction. Sooner or later, we will all die and go to stand before the Lord. My hope is that you will hear the words ‘well done’, when you do.

Now, let me take you back to how I started this article, because I didn’t tell you everything. We call yesterday’s memorial Yom haShoah, or Holocaust Remembrance Day. But, that isn’t its full name.

Day of the Remembrance for the Holocaust and the Heroism

We often forget that there were heroes during The Holocaust. Israel doesn’t forget that, which is why Israel chose the 27th of Nisan (Hebrew Calendar) to commemorate the most heroic act by the Jews against the Nazis:

It began on the 19th of April, 1943, and it tied down several battalions of German troops for almost a month. The Jews of the Warsaw Ghetto died, but they died fighting.

Israel will never forget that. Never.

The tragedy is that the Jews could have been saved if they had listened the warnings that had been given to them.

Please. You must prepare.

I will remember all of you as heroes, but I would rather know you as survivors.