I am amazed and appalled at how quickly and resolutely we are moving towards utter financial catastrophe. The global economy sailed past its sell-by date long ago, and the rot has just about reached the surface. In fact, some of us can already see it – and smell it – from where we stand.

As if that wasn’t bad enough, the US has a government that is out of control. Corporations write policy and bureaucrats enforce it to the letter. Children are being stolen from parents.

I hope that you’ll be ready for what comes afterwards.

Spring has finally come to Taipei. The windows are open, and I’m running around in my favorite uniform – shorts, sandals and a t-shirt. The rest of the Taiwanese are still bundling up in warm jackets, and they give an involuntary shiver whenever they see me braving the weather in such insubstantial gear.

Of course, being the only Euro/American for miles and way-way too tall… with glow-in-the-dark-white hair …means that I tend to stick out. A lot.

I’ve spent something like 20 years living in Asia, amongst the vertically-challenged, so I’m used to it. What I’ve never really gotten used to, is the heat.

Both Israel and Taiwan suffer from obscenely hot summers, and I hate that. I really-really do. But, the fact that this summer will probably be our last good one… well …I think that I won’t complain as much as I did last year.

Will You Do Something?

The good thing is that you have some time to do something. A few months, at least.

Are you going to do something?

I’m sitting here in Taipei, Taiwan, and the Taiwan government is not doing ANY of the stuff described in those links above. And, Taiwan isn’t the only country out there that has such a good track record. In fact, quite a few countries in the world aren’t nearly as evil as the US government.

For those of you who refuse to leave – or can’t – you do not have many other choices. And, you will only have the next few months to make those choices. Here is one option that you need to pay attention to:

The American Redoubt — Move to the Mountain States
http://survivalblog.com/redoubt/

For those of you who can’t stand the thought of going that far – or can’t – well… you will need to hope that my worst-case scenario doesn’t happen – financial collapse, followed by war and then nuclear war. However, even just financial collapse will put your life in grave danger – if you live within 150 miles of a city of 100 thousand, or more.

The Collapse Of Society

Please understand that financial collapse will cause the cities across America to tear themselves apart. Before it’s over, you’ll be begging for martial law. Think about what happened when the EBT cards (electronic food stamps) failed, for just a few hours. Now, think about what would happen when ALL cards fail – EBT cards, credit cards, debit cards, bank cards. Everything.

Within three days, those living in the cities will start killing each other.

Do you have a plan for what you will do when that happens?

Those of you who DO have a plan, think about making sure that plan includes others. You cannot do this alone. Even if you have no resources, you can still connect with others.

Here is how you can connect:

And, if you can’t find like-minded people in your area, then it’s time to start a group, yourself.

The alternative is to just give up, and I believe THAT to be a sin.

Some Heavy Humor – With A Message

Okay, that was pretty heavy, so let me introduce you to a bit of heavy humor. And, pay attention, ‘cuz there’s truth in this one. Lots.

(Really. Cats are people too!)

Now, let’s get back to business.

Many have been asking me about the recent elections in Israel, and who I prefered to be elected. I surprised some of you by essentially saying:

I don’t know, and I don’t really care.

However, I AM a bit miffed that my favorite politician – Benny Begin, son of Menachem Begin – would never get elected as Prime Minister. That guy has more integrity than a house full of politicians. And, he’s a scientist. I like that.

What about Binyamin Netanyahu?

He’s too much of a politician for my taste. And, I don’t like the taste of teflon, which he has too much of. But, there IS something about Netanyahu that I like A LOT:

THAT, I like. Lots and lots – even parking lots.

Oh, and here’s a comparison between Bibi and Obama:

THE LEADER OF THE FREE WORLD

While Obama was smoking dope, Netanyahu was doing this: 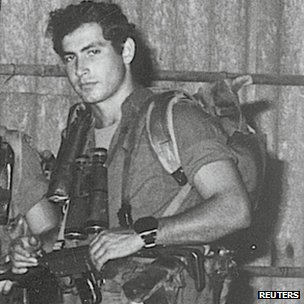 Bibi qualified for – and served – as team leader in the most elite special forces unit in Israel:

Only Unit 669 has a more elite status than the Sayeret Matkal. (Except for a couple of bad choices, a friend of mine would have been in 669.)

So, if I had to choose between the two…

…you know who I would go for.

Of course, none of that explains why I am so nonchalant about the recent elections in Israel. The answer is simple:

God has this one.

Seriously. Of all the countries talked about in the Bible, only one country has the blessing of God in the Last Days: Israel.

Only Israel (and Egypt) has the guarantee that there will be a blessing, at the end. This means that anything that happens – no matter how bad it might seem – is for the good of Israel.

The United States of America cannot say the same.

THAT is why I am ambivalent about who wins elections in Israel. Should a fool have been elected… well …it could have been God’s plan to use a foolish leader, for a wise purpose. God is like that.

However, I am less ambivalent about those who curse Israel:

And I will bless them that bless thee, and curse him that curseth thee: and in thee shall all families of the earth be blessed. – Genesis 12:3

I don’t know about you, but I prefer being blessed over being cursed. Unfortunately, the US government didn’t get the memo:

And, don’t get me started on the CIA’s ‘relationship’ with Israel.

The bottom line is that Israel knows that America cannot be trusted. Yes, the American people have forced the US government to come to Israel’s aid in the past, but the US government didn’t do it willingly. And, they’ve done their best to cause as much trouble as possible for the Jewish State.

I covered those topics extensively on Israel Outlook, so I won’t cover them here. (Although, most of my articles from years-gone-by have been lost.)

The Choice Is Yours

So, here I sit, in Taiwan, welcoming the arrival of spring. Most of you are in the US, and will do the same – when it arrives. However, I am probably in a far, far safer location than you.

I didn’t come here to be safe. I came here to serve God – and to escape the decadent evil that America had become. Five years ago, when given the choice to return to the US, or follow God’s calling to Taiwan… the choice was easy to make. Of course, I’ve been making such choices for more than twenty years.

Have You Chosen God?

Your steps should always follow the path laid out by God. No one loves you more than He does. No one knows what is best for you, except Him. However, that requires faith. And, faith is a choice.

When faced with such questions, I often respond this way:

And, you may only have this Summer to make that choice.