I had something of an impromptu day off yesterday when the Internet connection to a large part of Taipei went down for what seemed like most of the day. (sigh) …It was so good to have a few hours where I was completely cut off from the rest of the English-speaking world – which is why you didn’t get your daily dose of doom yesterday. Now, where were we…

I remember when we they banned the use of CFCs, or Chlorofluorocarbons, from spray cans, air conditioners and refrigerators. The hysteria was acute. Everyone was desperate to stop using them. It was a huge hot-button. We just HAD to protect the ozone layer ‘cuz the high priests of environmentalism said so.

Which is why those same high priests of environmentalism are dumping tons and tons of ozone-destroying chemicals directly into the stratosphere – where the Ozone Layer is.

Isn’t that just so… logical?

A little bit of ultraviolet light is good for you. A few minutes every day, on your skin generates quite a bit of Vitamin D. Plants find some use for it in photosynthesis. It’s great for committing germicide (i.e., killing nasty microbes). You need it if you are ghastly pale, like me. And, if you wanted to kill off all life on planet Earth… …well, it’s perfect.

If you wanted to sterilize planet Earth, all you would need to do is completely eliminate the Ozone Layer that protects us from the worst of the UV radiation (ultraviolet light) that comes from our sun. Without that Ozone Layer, there would be no life on Earth.

Which is why we are destroying it. Or, maybe I should say that it’s your tax dollars being used by the US government (and others) to destroy it – in the name of combating Global Warming.

Do you remember the phrase, ‘It became necessary to destroy the town to save it‘?

Heard of the Ozone Hole over the North Pole? 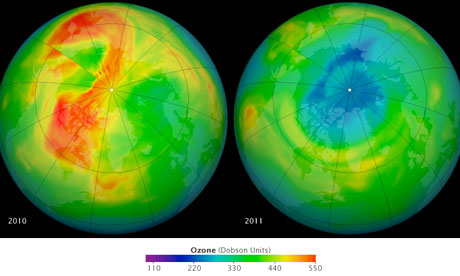 Hole in ozone over northern hemisphere in 2011

The most harmful UV radiation is UV B and C. Once upon a time, the amount of UV B hitting us was about 5% of the total amount of Ultraviolet Radiation that we were receiving, and we were getting 0% UV C.

That’s changed. Want to guess how much is hitting us now?

And yes, we are starting to detect UV C!!

Do you know what that UV radiation is doing to life in the ocean?

Well, it looks like we’re going to find out, and I really don’t want to.

I almost forgot about what happens to plant life on land under high UV. This shouldn’t be hard to figure out, but heavy Ultraviolet light makes survival difficult for many of the plants that we need. (Vegetables and grains are quite finicky about their growing conditions.)

Oh, and there’s a fun bit of irony. Ultraviolet light is very energetic. Very. When more of it hits the ground, more heat is generated. What do we call that?

What happens when it does this globally?

So, all that chemtrail spraying is probably INCREASING global warming!

Well, the fun doesn’t end here. I strongly recommend that you read these two articles that are packed with more information and links to real source material:

And then, I did a search on GeoEngineeringWatch.org for articles talking about UV

Take a look at those articles, also. But, don’t stop there.

Last night, I also listened to a recording of Dane Wigington on the Vinny Eastwood Show, recorded on January 13, 2014:

It was billed as “The Most Intense Geoengineering Interview Ever!” However, it’s three hours long.

That’s pretty long, but it was a good show. If you want to listen to it, one hour at a time, you can also find the show broken down into three parts, here:

If you’ve been reading my articles, then you know that we’re in trouble. This is nothing new to you. But, maybe this geoengineering catastrophe adds a new dimension to your understanding of what is wrong. Hopefully, it will help motivate you to take action, like… …oh… …move south. And, equally hopefully, it will give you one more bit of information to help convince others that there is a problem.

There are powerful interests behind the chemtrail program, and you can choose to fight them – if you want. But, my biggest concern is for your well being.

May I recommend a permanent vacation in the Southern Hemisphere?

Are you ready to prepare for the terrible days that are coming?